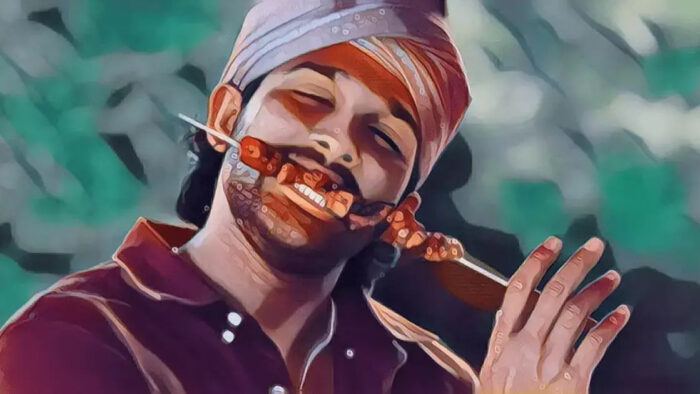 There is a certain delight to consuming cinema that emerges from India’s southern states, possessed as it often is with a cultural consciousness rarely seen or celebrated. Surely the best example of this is the popular Bahubali saga, a proud depiction of the old kingdoms and ways. Another example of fair representation appears in the themes seen in 2020’s Ala Vaikunthapuramulo starring Allu Arjun, a movie that is replete with Hindu symbolism, and carries it even within its name.

The title of the movie is in itself a direct reference to the richness of Telugu literature, with the phrase “ala vaikunthapuramulo” being taken from a verse of Bammera P?tana translation of the Srimadbh?gavata, specifically from the episode of Gajendra Mok?a. It immediately paints in the mind a picture of Mah? Vi??u relaxing in his heavenly abode, sporting with his Goddess in utter leisure and relaxation. Yet, upon hearing calls of distress from his devotee, Lord Vi??u prepares to leave Vaiku??ha most expeditiously. The imagery evoked by P?tana is timeless and aesthetic, his style mellifluous and exemplifies why the translation remains a gem of literature centuries later.

There, in Vaiku??ha, deep within the abode of Vi??u, near the hibiscus garden beside the lotus-filled ambrosial lake, Vi??u, who was sporting with Goddess Lak?mi on a bed of flowers, upon hearing the distressed cry of Gajendra, the king of elephants, readied to.

The humble P?tana occupies the place of one of Telugu literature’s most brilliant of gems. “Ala vaikunthapuramulo” paints the image of Vi??u in utter contentment and leisure, alluding to the verse itself simply by virtue of reference its first few words. In fact, this verse is said to have been composed by Vi??u himself — P?tana began the verse and left it unfinished, yet when he returned, to his astonishment, it had been completed, appearing to his daughter that her father never left at all and continued to write the entire time. The verse plays in the movie’s soundtrack, in the scene where the protagonist enter’s his true home, Vaiku??ha, for the first time.

Vaiku??ha is the abode of Vi??u, where he resides and presides from. It is where K???a, his avat?ra, returned to once his work on the earth was finished. When a new temple is consecrated, or even within one’s home —the gods are “invited” to come and take residence. They are told that this is their own home to begin with, this belongs to them — so why do they not come? Even ?gvedic s?ktas, under one interpretation, welcome the Devas to come and spread beatitude, beginning with an invocation of Agni in the very first s?kta.

Such is the larger theme of Ala Vaikunthapuramulo. The protagonist’s home is named Vaiku??ha in the movie, and the plot is a story of him eventually “returning” to where he always belonged —to the place and status to which he belonged in the first place. On an epic layer, the movie is a celebration of K???a/Vi??u— and which Hindu would not find that refreshing?

The trope comes to a head and is magnified beautifully in the movie’s climactic song, Sittarala Sirapadu. For those who do not understand Telugu, while the subtitles on Netflix try, they do not truly capture the folk dialect and sentiment. But almost everyone can effortlessly detect the allusions and metaphors in the subtle imagery nonetheless.

As the song begins we see our protagonist approach the “battlefield” (the villain’s lair), and wrap a cloth around his head as a turban. But this isn’t any rag-tag turban, it’s an obvious visual imagery of K???a. He approaches, nonchalant, unafraid —for everything is but a play for K???a, and can we imagine him being fearful or hesitant?

As the folk-style song, Sittarala Sirapadu, breaks out, so does the climactic fight. The song itself refers to a local hero, a savior of damsels and denizens alike. He fights bulls, villains and even floods —but brings protection to all. The song glorifies his deeds, his bravery, and his might. This is a direct affirmation of the larger Indian literary tradition, which has always been built around heroes and their exploits. R?ma, Par?ur?ma, Skanda, Arjuna and K???a and more — are all heroes with folk retellings of their stories across the length and breadth of our country. We celebrate their deeds, their might, their valor and their heroism. So while the song seemingly celebrates Bantu (the protagonist) beating up a bunch of bad guys, on the epic layer it celebrates the great leela (or play) of K???a. This is reflected in the momentary dance that Bantu does during the fight, for everything is but a dance and leela for K???a. With equal ease he vanquishes enemies, loves and dances. Bantu’s play is a tribute to K??na’s leela.

This is brought home in a split-second frame towards the end of the song and fight scene, the title image of this post. The antagonist throws a skewer at Bantu, who catches it with his mouth. Don’t be awed by that piece of slick action. Notice the frame that immediately follows as Bantu holds the skewer to take it out of his mouth. This frame- turbaned Bantu with a spoke held in his mouth- is not what it appears.

That moment harkens to the truly enduring image of Kr??a holding his flute — which in itself is a symbol of his l?la and play.
It was delightful to see, and even more so to spot it. It’s not often one sees dharma-affirming references on the big screen. As an addendum, if you enjoyed this, I also recommend watching Allu Arjun’s DJ, where one is delighted by hearing words such as “Puru?a S?kta,” and the viewing of a character that has never appeared on the Bollywood screen —a “good”, or even normal brahmin.

Civilization perpetuates through creative representation of culture. But cultural orientation in mass media has gone unexamined. This article launches a series that analyses cultural representation in cinema and OTT. The larger goal is to partner with the creative industry, and support efforts to be culturally authentic. Historical context, cultural elements, treatment, design etc.- these are things B?hat is set up to offer as a creative service.

this is the text, since they used some sanskrit words it is not reflecting on the post