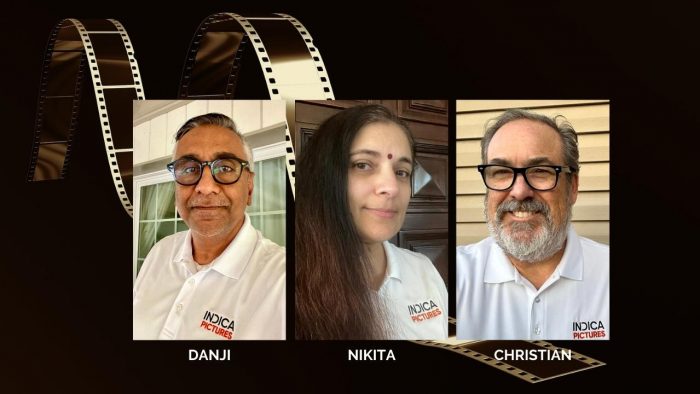 The Indic Film Utsav, a global film festival entirely focused on Indic content, is returning for its third edition. After two previous editions registered a short and successful run-up, filmmakers are participating to make the best of the rewarding platform. Some filmmakers are even re-submitting their work for the third edition at the first ever global 24/7 OTT film festival - in November 2022. Festival Director - Danji Thotapalli, Head of Programming - Nikita Hattangady and Head of Filmmaker Liaison - Christian Frost, tell Sumati Mehrishi about showing inspirational and positive storytelling to viewers, hosting, and the possibility of breaking into physical screening of films.

Congratulations on announcing the third edition of the Indic Film Utsav. How has the journey been in terms of concept, screenings and audience response?

DANJI THOTAPALLI: Indic Film Utsav has been remarkable. The initial brainstorming around the model was driven around the fact that the audience for Indic-content is global, besides all over in India. Therefore, a festival in one city just didn’t make sense. So, we chose to be the first ever global 24/7 online OTT film festival, focused exclusively on Indic content that has positive messaging and is suitable for family-viewing. The general tendency for audiences to adopt streaming of content certainly helped a lot. We have had two successful years with about 43k unique views last year alone. Filmmakers are comfortable with our highly secure DRM-enabled hosting platform that made sure we did not have even one case of piracy. One other thing is that ours is one of a few festivals that offers prize money to winning filmmakers. Our filmmakers are a delighted lot with several of them re-submitting films and becoming jury members. Overall, happy with what we have accomplished in our short run-up.

You have been able to accomplish two editions of a successful festival in a short runway, completely on an online backbone. What has been the response in submissions and views?

DANJI THOTAPALLI: In Los Angeles, where I live, there are all kinds of film festivals, some of which cater to super-specific genres. For example, there is WIHFF “Women in Horror Film Festival”. Film Festivals take a few years to establish themselves and most festivals also don’t survive past 4-5 years. We are lucky that we are part of Indica which is passionately committed to the Indic cause. The first two years have been successful, I must say. We had close to 1300 film submissions of which we programmed 140 films (a 10% submission to screenings hit rate) - which is pretty good. As I mentioned previously, our global reach has brought close to 43k unique views last year. Audience response has been great. Besides the large number of views, we have received specific responses of appreciation for the kind of films on our slate. Filmmakers have had a lot of good things to say about our festival. Kireet Khurana, who won the Special Mention Jury Award for Best Feature for his T for Taj Mahal came onboard as a Jury Member last year. We have had several returning filmmakers. Of course, there are always risks and challenges. This year, we are seeing the tail end of pre-pandemic film content. Not many new films have come out in the last two years due to the pandemic. Some films have already been released on platforms/theatres, so those are not eligible. Much of the content that gets produced is either political or dark.

Change is a constant in cinema. Constantly changing is the perception of what we know as ‘popular’ with the Kashmir Files, RRR and Rocketry: The Nambi Effect, redefining content, response, and retelling in 2022. Will they leave an impact on the era and arena of short films? If yes, how?

NIKITA HATTANGADY: Short films have a mind of their own. Most filmmakers make shorts about subjects that personally affect them in some way because there is hardly any commercial scope for a short. The artists are more concerned with beautiful and meaningful storytelling than whether the public will like it or not. However, current trends in society do affect the subjects of shorts as do the kind of stories that top-tier film festivals want.

The Indic Film Utsav has shown excellent films from filmmakers, some of whom may be well-versed with film festivals. Most others may not understand how film festivals work. How do you overcome such disparity in order to give filmmakers a welcoming experience?

CHRISTIAN FROST: Our film festival is the perfect space for filmmakers whose films might not have an established platform to be screened or their stories to be told. We do our best to limit the submission process and communications steps for everyone making it as easy as possible with no barriers. These filmmakers are the fuel that makes this festival burn brightly and we want filmmakers who’ve had a positive experience with our festival, to share and invite their filmmaking friends to consider the Indic Film Utsav as a path to share showcasing their stories. As our festival strives to find and share films that have positive messages that entire families can watch, my role is to help ensure a seamless and pleasant transition through the entire process. Regardless of the outcome of their film, we want these creators to look back remembering that we treated them and their projects as family – part of the Indic Film Utsav family.

You believe in the power of the “positive”. Will the Indic Film Festival contribute to the celebrations of 75 years of India’s Independence by celebrating positive films centered on India?

NIKITA HATTANGADY: Absolutely! It is imperative for the new phase of India to have more positivity especially in media. We need to participate in focusing on the country’s strengths to encourage the people of India to move in a positive and constructive direction. It is important to point out weaknesses as well, but since the media is also saturated with negative storytelling, we are taking the lead in showing inspirational and feel-good storytelling for our viewers.

Will the Indic Film Festival break into physical screening of films and commissioning films in the coming years?

DANJI THOTAPALLI: We certainly have plans to conduct our Opening and Closing Night events in person. Interaction of audiences and patrons with filmmakers is a key aspect that makes film festivals complete. Our ideas are to conduct these events globally. One year, we may have the Opening Night in Singapore and the Closing Night in Dallas. Next year, London and Los Angeles. That is something we are working on and we hope will become a reality now since the pandemic has pretty much died down. As regards new initiatives, we are working on an Incubation Project where we’d like to identify promising filmmakers and provide support through the whole cycle of filmmaking – right from idea through to production.

How many registrations and films are you looking at/working on at the Indica Film Utsav in 2022?

NIKITA HATTANGADY: We will keep the selections like the 2021 festival, which is around 50 films in total. We may have more or less – depending on the variety of the programming. We have some excellent films to share this year as well.

Would you think about opening the India Film Utsav 2022 to a room for discussions – on the films shown, themes covered, the talent displayed, the way forward, on social media under the banner of Indica Pictures?

CHRISTIAN FROST: Looking back over the last two years, the festival has attracted an impassioned roster of talented storytellers. These folks have a unique set of experiences in the making of their projects. Utilizing this as a valuable resource, we are looking at the possible expansion of future panel discussion groups and/or one on one conversations to learn and share even more with our audience. We’ll seek to explore further these storyteller experiences as an additional value platform in discussing our storyteller backgrounds, inspiration, struggles, funding challenges as part of the process. It’s all about execution and to learn from others is what can inspire and encourage the future filmmakers.

How do you measure the success of a film festival?

NIKITA HATTANGADY: If the public enjoys the films, if they learn something from them and if they feel inspired and uplifted by our selections, then we have a successful film festival.

The OTT platform is bare and barren when it comes to short documentary films from India. Is that good news or bad?

NIKITA HATTANGADY: Short films are completely absent on the OTT platform, whether documentary or narrative, regardless of what country they originate from. The commercial value of short films is almost nil, and so, very few short films are available on OTT platforms. However, I believe that short films will have more value in the near future as people rely more on watching good content at home and people are super busy! A short film is ideal for a busy schedule when you want entertainment but do not want to invest too much time.

To learn more about this team, please visit https://indica.pictures/about/