‘The Contribution of Music and Sound Was Irreplaceable’ 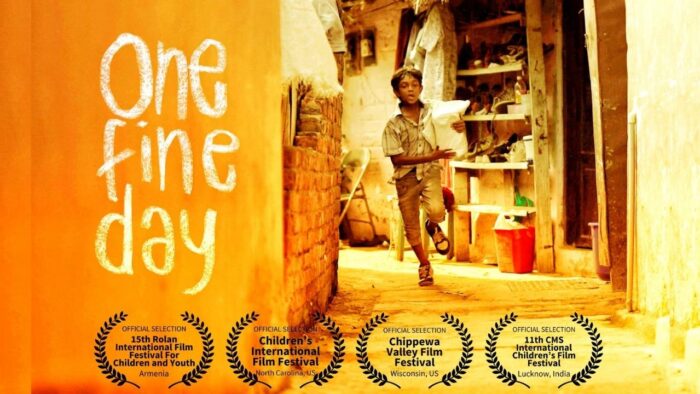 For M.R Vibin, a short film brings the freedom to tell small stories as it does not require the canvas of a feature film. ‘One Fine Day’, his film revolving around two children, is ‘small’ and ‘big’ for several reasons. In 2020, this directorial debut, won the Best Children's Ultrashort - Jury Award at the Indic Film Utsav's first edition. He tells Indica Pictures that a story plays a pivotal role in choosing the pace and style of a film, and that his humble film taught him that language is not a barrier when it comes to exploring universal content; and more.

Ten minutes of a heart-warming, gentle, moving, joyous and refreshing story revolving around children performed by children – that’s ‘One Fine Day’. What does this film mean to you?

‘One fine day’ will always remain close to my heart as it was my directorial debut. It is an overwhelming experience to do a film after going through years and years of hardships faced during the film-making journey. I was amazed when it got worldwide acceptance and appreciation from different walks of life.

What pulled you to the idea of telling the story of a rag picker child discovering the joy and treasure of colours and sharing?

The prime reason behind opting for this story is that there are people who do not have accountable possessions, who can find things like this invaluable and will find a ray of hope in their life. This may not be the case for the people having a quality life. The other side of this story is that there might be someone who didn’t find value in these colours and the talent of some child might have been thrown into the garbage.

The scenes centered on the uncovering of treasure from garbage reveal the brilliant actor in Siddhartha. What aspects of his work and talent inspire you as a director/filmmaker?

Siddhartha is a highly talented and brilliant actor. He holds an incredible grasping power to express the emotion of the character effortlessly and I didn’t spend much time grooming him. Owing to his impeccable skill, I could wrap up the shooting rapidly. I am sure that he will become a distinguished actor in the near future in the film industry.

Colours, joy, and innocence can be easily connected with children. The storyline is also in line with childhood happiness and it helped me to ascertain a better result from these child artists. They enjoyed portraying the characters because they realize emotion from their perspective.

How have viewers interacted with you on the larger social message in the film?

I didn’t get much feedback when I released ‘One fine day’ via YouTube. But I got plenty of appreciation from short film festivals conducted in various parts of the world. ‘One Fine Day’ competed with children’s short film festivals and other short film festivals, simultaneously. Since it has universal appeal, it cannot be categorized as a children’s movie alone. The pinnacle factor that I learned from my humble film is that if you have universal content, then language is not a barrier.

When did your journey in film making begin?

I believe one cannot jump into filmmaking or any other process associated with a film without having a proper interest in it. I have been passionate about film since my childhood and this medium inspired me a lot. Though I have a master’s degree in commerce, I chose my first job with an advertising agency as a copywriter because I knew that working there will help me get into the cinema, where visual media has a significant part to play. Malayalam feature film director Sunil Ibrahim, who was then my colleague in the advertising agency, offered to work with me when he did his first feature film. He was aware of my passion. I have been working in the film industry for 10 years as an associate director and writer.

I would like to experiment with various themes, paces, and styles that enhance different genres. For me, these elements heavily depend upon the content of the cinema. I believe a story plays a pivotal role for me to choose the pace and style. I don’t want to be known as a categorized director.

‘One Fine Day’ is a film rich in sound and music. What inspires you to believe in music and sounds that feel ordinary but give impressive weight and character to a simple story?

I believe cinema is a visual medium. I thought about creating something with minimal dialogues and a rich visual output. In order to have an unplugged visual experience, the magnitude of sound and music should be top-notch. Since the story demands perfection in music and sound to convey the emotions to the people, I didn’t make a slight compromise on that, and I approached renowned music and sound experts for doing this project as they felt the relevance of their contribution. Just like the two artists, the contribution of music and sound was irreplaceable.

What were the challenges involved in telling a story based in an ordinary setting to reveal deeper meanings?

To be honest, I didn’t face any challenges in presenting the story. Since it is not a complicated story, it can be easily communicated. I knew that if I could present the story in the simplest form, then it would help the spectator to have a clasp on the deeper layers of the story.

What is your next project about/on?

I am planning to do a feature film and its script work is progressing. It will be a film circling situational humour. I hope it will entertain the people. It will go on board sooner than before.

What are the other subjects from your home state/region that interest you?

We live in a socio-political environment and tend to confront plenty of stories. Moreover, the Malayalam film industry has a reputation for bringing intelligent and sensible movies and I keenly observe the rational revolutions in the industry. But I don’t believe in state-wise discrimination in telling a story and I trust that human emotion can be easily commutable with another human’s emotion irrespective of language, colour, caste, etc.

Why is the medium of short films important to you?

It provides you the freedom to tell small stories which do not require the canvas of a feature film. Also, a short film gives us the fuel to take risks with experimental creativities. On the other hand, a humongous effort needs to be put in for telling a small story in a short span of time. At the end of the day, a short film will give an interesting space and it will not deteriorate.

‘One Fine Day’ won the jury award at the Indic Film Utsav. How does this award encourage you in filmmaking, directing and storytelling?

Getting recognition in any form is an added advantage because it gives flair to go ahead. Getting a jury award at the Indic Film Utsav will always be a precious achievement. It is encouraging. It is my responsibility to provide better output than the previous. It is a fantastic feeling to get applauded by the world circuit and to be able to know people who don’t know our culture and language, but who can trace the emotion because of the universal appeal held in the subject.