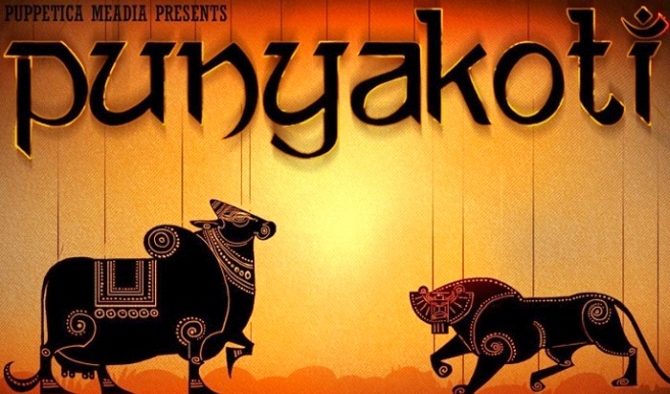 The above line in the introduction video of India’s first Sanskrit animation film – Punyakoti - explains the story of the struggle between human greed and nature’s harmony. The story of Punyakoti, India’s first Sanskrit animation film,  is drawn from a popular Kannada folk tale of the conflict between a cow’s love for its calf and the word given to a predator.

Dharma Sankata is faced by all. How does the film seek to resolve this conflict? Producer of the film Ravishankar Venkateswaran says “Integrity gives clarity and confidence. It does not give comfort and the consequences of integrity is not easy. But it is a choice that has to be made. It is the best way to deal with reality in front of you. That is how the character of Punyakoti deals with it.”

Ravi, a HR professional in Infosys, Bengaluru, made the 90 minute film in Sanskrit, inspired by the classes offered in Infosys. “This was a Samskrita shibiram organised by Samskrita Bharati at Infosys. It is very effective. I know a few people who are inspired by it. But the numbers are very few. Often work takes over and people lose the commitment. It happens to me also. But I come back to it because I am very perseverant.”

Filmmaking is not new to the tech savvy Ravi. His first job after graduation was writing the script for India’s first children’s animated CD rom film— Panchatantra.

He told one news channel: “At the back of my mind I always had a dream to make my own animation film. After watching Arjun— The Warrior Prince, I told my wife that I wish to make an animation film. She lent her support and then there was no looking back. I chose Punyakoti, the Kannada folktale, because it is a popular South Indian folk story and gives the message of leading a life of integrity against all odds and living in harmony with nature. There was an anti-corruption movement also going on around 2013 and hence it was relevant for our times,” says Ravi.

Ravi has scripted the story anew with his own takes on the encounter between the cow and the tiger in a village which faces impending drought. “Writing stories has been my hobby. I wait for an inspiration to strike me. Then I develop it. Sometimes good ideas come during sleep or while in a bus.  The sequence just appear inside you. I don't have a process for it. I cannot explain how it happened. I don't know when the next story will appear in my mind,” says Ravi.

He took the script to the megastar of the Tamil film music world Iliyaraja who composed the songs for free for the film.

When the team approached around 100 animators to give one minute footage each, there were hurdles. That was when Mohandas Pai, chairman of Manipal Global Education and former CFO of Infosys asked them to crowd fund through Wishberry. It also led to them approaching Samskrita Bharati.

“When I contacted Samskrita Bharati, I was invited to give a talk to the students about the project. It was very touching that they pooled in and contributed too. We met Professor Leela, who has over 35 years of experience in directing Sanskrit plays. She showed a lot of interest in helping us."

Ravi says his role was to “make what I wrote appear on screen with the limited resources I had. I had to ensure that the characters, location, sound, music everything comes together working with specialists.”

Professor Leela helped from dialogue supervision and delivery to selecting and finalising the cast. The characters for voice-overs are all a part of her Sanskrit drama troupe ranging between 5 years (her granddaughter) to 80 years. Popular names from the Sanskrit theatre fraternity include Anupama Hosakere and Vidyashankar Hosakere, Narsimha Murthy and Anand Raja Mani were among the others who lent their help.

Apart from Dr. Leela’s troupe, the cast ensemble also boasts of some eminent names comprising actor and national awardee Revathi and Roger Narayan from Hollywood of U-Turn fame. The national awardee film editor Manoj Kannoth is on board and Anwar Ali, a famous contemporary poet based out of Kerala, has written the dialogues for all the characters.

On the importance of making films in Sanskrit, Ravi says, “India has several priorities at this moment. We are making up for years of deterioration in many areas. Promoting Sanskrit may not be priority for the government or the establishment today. Or even the people. But a few who can do something should do their little bit.”

(Indic Academy supported the making of the film)