Namami Yoga-Vidye, a Tribute to the Divine Goddess on World Yoga Day 2020 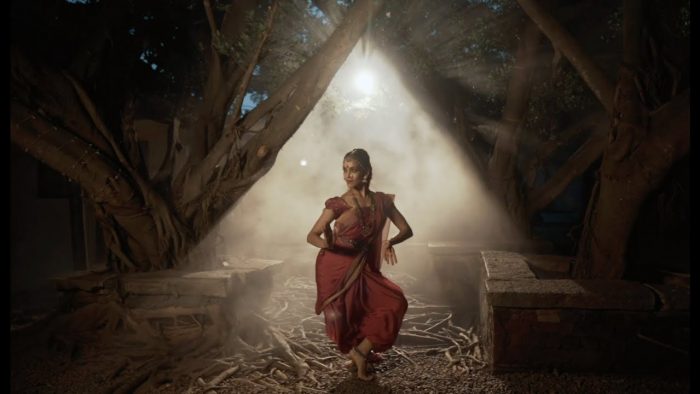 Namami Yoga Vidye, the Center for Soft Power’s offering for International Yoga Day pays homage to the divine Goddess, worshipped all over India as the divine mother.

While most modern interpretations of Yoga see only the gross physical body, it is well known that within this resides a body we cannot see or touch. CSP’s World Yoga Day 2020 video, in collaboration with Indica Yoga, is a tribute to the divine cosmic energy (Sakti) in mantra energy, kundalini energy and through icons/mandalas involving her three forms - sthula, sukshma and para experienced via the body – yantra.

In this dance video, Bharatanatyam dancer Rukmini Vijayakumar, depicts Devi worship which uses unusual patterns (yantra) and uncommon formulae (mantra) and the human body. She has chosen Durga to depict the Devi form.

Rukmini Vijayakumar is known to treat her themes in a unique way, through the lens of tradition. The actions involved in the worship of the female energy are depicted by her in this dance both symbolically and suggestively.

She says that last year when CSP produced Yoga Niyoga, the dance showed visually the verses from the Patanjali, and it also showed how yoga and dance in movement are similar. “I would say that video was a little bit more contemporary in terms of processing, thought or how the video was.”

One of the thing that inspired this video, says Rukmini is a song composed by Rajkumar Bharathi which she choreographed 10 years ago. She had performed this during her recent Natyanjalis, with the Devi appearing just like She does in the video.

In India, the Indus Valley civilisation illustrates the prevalence of the mother goddess worship; and the earliest hymns in the Vedic corpus are to Her. Scholars have pointed out that while it is usually believed that the Vedic preference is for male divinities, several goddesses are mentioned in the Rgveda including Aditi (mother of the Gods), Apo-devi (water-goddess), Ushas (dawn), Prthvi (earth goddess), Vak (speech), Ratri (night), Sri (prosperity), Nishtthigri (Indra’s mother), Urvasi (celestial nymph), Sarasvati (river-goddess) Sandhya (eventude), Sinivli (goddess of the lunar phases), Sraddha (faith), Gayatri (mother of Vedic lore) and Savitri (solar energy). The Sarvanakramani (13th section) mentions other Goddesses of the Rgveda including Durga.

The expression Durga literally means ‘hard to reach’ impossible to overcome’. She is so called as she helps the devotee to ferry across the abyss of evil states (durgati-nasini), writes Vedic scholar S K Ramachandra Rao. In the Argala-stotra, Durga is taken to signify her ability take us across the ocean of transmigatory existence, which is the end goal of all Indic knowledge systems including Yoga.

The music for the video has been set by Rajkumar Bharthi, a Carnatic musician, using shlokas depicting the Devi and her connection to Yoga. Renowned sound engineer Sai Shravanam is also a part of the project. Carnatic vocalist Abhishek Raghuram’s voice lends great gambhiram to the bhija aksharas embedded in the mantras selected.

Bharthi has collaborated extensively with Rukmini. “She is a very intelligent dancer who is constantly on an update mode. She has her own way of making the scenes."

The video is lifted with the skill of self-trained tabla player, Sai Sharavanam who has given several performances worldwide and is also a composer. Sai Shravanam combines the best aspects of technology with the sublimity of Indian classical music. He has arranged the Indian score elements and also recorded the Indian music for the The Man who Knew Infinity, a Hollywood biopic on legendary Indian mathematician Srinivasa Ramanujan. In the year 2012, his versatility fetched him commendable recognition as a Sound Recordist/Additional Engineer for the Academy award winning film “Life of Pi.

On his role he say: “I have to bring out the music the way the composer wants. I am a catalyst here. I had to bring sir’s idea to the expectation of Rukmini. All of us think Yoga is soft, but here we are representing Devi, Kali. So when we represent Kali how do we bring that sound? That is when I intervened and said we had to bring out the louder sound.”

He went with the keyboard, due to the Corona crisis and with no traditional artistes available to play either the veena or sitar.

All the singers were those within one kilometre of his house, with the lead singer being Carnatic genius Abhishek Raghuram.