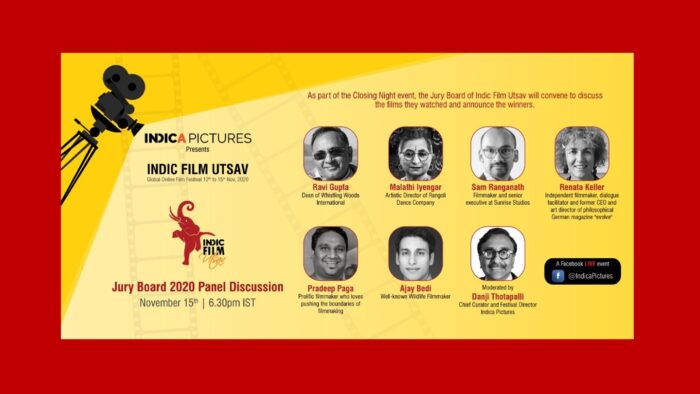 The first-ever Indic Film Utsav concluded on Sunday with a Jury Board Panel Discussion followed by announcement of the winners in various categories. Gumnaami, the Closing Night Bengali film about alternative but compelling theories around Subhash Chandra Bose’s death, brought the curtains down on the 4-day festival.

The 2020 Jury Board consisted of a diverse panel drawn from various disciplines. While Ravi Gupta is the Dean of Whistling Woods International, the well-known film school in Mumbai, Malathi Iyengar is the Artistic Director of Rangoli Dance Company in Los Angeles. Ajay Bedi is the twin brother of Vijay Bedi, both of whom are among top wildlife filmmakers. Renata Keller is an independent filmmaker, dialogue facilitator, former CEO and Art Director of the German philosophical magazine Evolve. Sam Ranganath is a filmmaker and senior executive at Sunrise Studios, and Pradeep Paga is a prolific filmmaker who loves pushing the boundaries of filmmaking.

Director Achal Mishra’s debut Maithili language film, Gamak Ghar / The Village House won the Best Feature Film award. “In Gamak Ghar we are invited to be present in a house in an east Indian village. The film shows a wonderful, artistic way of the passing of time, the impacts of modern India on family and social structures without judging it. As if an ever-present being was present, silently and lovingly watching the neglect and decay of a house that once hosted a lively Indian family. The cinematography is just simply amazing”, Said Renata Keller. Kireet Khurana’s Hindi film, T for Tajmahal came in at a close second, and impressed the Jury sufficiently enough that it won a Special Mention. The Audience Choice Award in the Features category went to Sandeep Mohan's Nirmal Anand ki Puppy, a Hindi-language film about how life can take a turn when calamity strikes, but the tenacity with which we recover.

In the Documentary category, Malati Rao’s Tibetan language film, The Geshema is Born won the Best Documentary Award. "The Geshema is Born is both gentle as well as a powerful film. Gentle in its depiction of the sensitivity to human emotions, purpose of one’s being, culture, heritage, meaning of life and eons of tradition. Powerful in its bold, groundbreaking and courageous narrative in today’s challenging times. It is also a very important film as it documents a turning point in Tibetan Buddhism. This film is and will be an absolute inspiration for many nuns and women in general, to peruse their calling towards advancing their study of sacred texts which was previously dominated by monks. Thereby, creating a higher level of awareness and understanding towards realizing the beauty of non-duality and gender equality”, said Sam Ranganath. Anjali Bhushan’s Polish/English language film, My Home India a forgotten tale about how India became that country that gave Polish refugees fleeing their home during WW2, won a Special Mention. But the film that won everyone’s heart was Sriram Raja’s The Flowers and the Gemstones - a Tamil film that references Skanda Purana and so beautifully narrated, that the images you see on screen will let you smell the flowers. It won a Special Mention too! The Audience Choice Award for documentaries went to Nikhil Singh Rajputt’s Blood Buddhas, an investigative film on the seedy business of antique smuggling specifically relating to Indian deities, and links to terrorism worldwide.

Under the special Wildlife & Conservation Films Category, Dheeraj Aithal and Pradeep Hegde’s The Last Hop(e) won the Jury Award, while Supunya Devavrata’s Gainda – A Conservation Story picked up the Audience Choice Award. "While every film was great and worthy to be the winner, my choice was driven the film's unknown hero. I also felt that younger filmmakers must be encouraged", said Ajay Bedi.

Under the special Children’s Short Films category, the Gujarati language student film Mara Dada / My Grandpa by Yash Solanki from Whistling Woods International bagged the Jury Award. Abhimanyu Kanodia’s Truce, a sports film, won the Audience Choice Award. Under the Childrens Ultrashort Film category, Vibin MR’s One Fine Day won the Jury Award, while Mallik Gaganam’s Chalk and Duster won the Audience Choice Award. Speaking about One Fine Day, Malathi Iyengar said, "One Fine Day shows how our innocence leads us to joy and wonder and a willingness to deeply engage ourselves in our days without fear and guilt".

Indic Film Utsav, conceived 12 weeks ago, opened on November 12th with Anandi Gopal, a Marathi language period film that won the hearts of many with its cinematic portrayal of Anandi Gopal Joshi, the first ever Indian woman to become a medical Doctor. Other significant films were Paul Howard’s “The Infinite Potential”, Manju Borah’s “In the Land of Poison Women”, Nirmal Chander’s “Moti Bagh”, Renata Keller’s “In the Fire of Dancing Stillness”, Kamal Swaroop's "Samudra Manthan" among many other heart-touching films. All films programmed into Indic Film Utsav are positive films and family-oriented.

“Indic Film Utsav has been able to accomplish several successes in its very first year – having received 850+ submissions, and registering over 20,000 user registrations, Indic Film Utsav has received over 13,000 views during the 4-day period. We did extremely well considering the pandemic and the short runway - right from focusing on Indic content and films that showcase India, all the way to putting together a robust online strategy that included a decision to go with just family-oriented positive films - all of it paid off quite well. We have already started brainstorming on how next year's festival should be looking like. But right now, it is time to celebrate the success! I thank everyone who helped us succeed and look forward to consolidating and expanding those relationships," said Danji Thotapalli, Chief Curator and Festival Director of Indica Pictures.