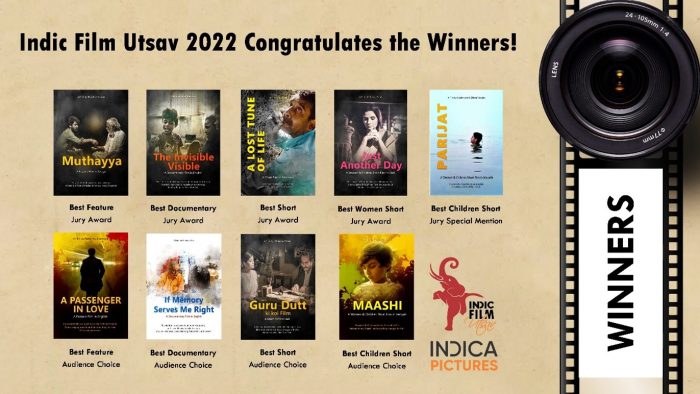 Indic Film Utsav 2022 brought the curtains down on the 3rd edition with a Jury Board panel discussion and announcement of the winning films. This year, Indic Film Utsav showcased 55 Indic-themed films under with 2 Sanskrit films bookending the competitive slate. As always, the Programming Team and Indic Film Utsav made sure that each film selected had a message of positivity in them. Yadu Vijayakrishnan’s Bhagavadajjukam, a Sanskrit-language feature film was the Closing Film of the festival. While Sanskrit-language enthusiasts were delighted with the film, even those who were not Sanskrit-conversant loved the film which was based on a 7th century CE comedy drama written by Bodhayana. Also, besides Features, Documentaries and Shorts, Indic Film Utsav 2022 had a special Women & Children Short Films category.

The Jury Board consisted of the 4 members of the film fraternity. Renata Keller is an independent filmmaker, dialogue facilitator and former CEO and Art Director of the German philosophical magazine, Evolve. Aditya Patwardhan is a Los Angeles-based filmmaker with a body of work recognized in India, US, Baltic & Eastern Europe, South Korea and Columbia. Sriram Raja is an Indic Film Utsav alum and an award- winning filmmaker. His documentary The Flowers and the Gemstones has received wide praise. Manouj Kadaamh is a prolific filmmaker who is passionate about films and performed in the role of Jury member at prestigious festivals all over the world.

The top award of Best Feature Jury Award went to Muthayya, Bhaskhar Maurya’s rip-roarious Telugu comedy in which 70-year-old Muthayya dreams of acting in movies but faces obstacles. His passion creates serious problems for his family. Somehow magic happens! “Muthayya hands down the best of the lot. It was rooted, realistic, entertaining, and emotionally very satisfying. The performances were beautiful. The film was hope-giving and wholesome. A perfect watch”, said Sriram Raja. “A highly entertaining film, Muthayya manages to do the unthinkable! Narrating a hero's journey of achieving a dream, but through the eyes of someone who wants no box unchecked. And Muthayya does so while being deeply entertaining, engrossing, and heartfelt”, said Aditya Patwardhan. Abhishek Bhatnagar’s A Passenger in Love won the Audience Choice Award in the Features category. “A Passenger in Love had its World Premiere at Indic Film Utsav. Top class writing that keeps the audience engaged throughout a dialogue-driven narrative style with an ending that comes in the last few seconds of the film is truly an example of filmmaker passion. Abhishek made this film for USD 5k and is looking for distribution”, said Danji Thotapalli, Chief Curator and Festival Director.

Kireet Khurana’s The Invisible Visible which is about the stories of homeless people unfolding through the lens of 'Koshish' won the Best Documentary Jury Award. “The Invisible Visible was one of the most compelling documentaries I have watched in recent times, this film sheds light on one of the most crucial and horrific issues of our times, and though it is a dark non-fiction subject, the filmmaker keeps it engaging, explorative, and compelling, so that I was left wanting for more information on the subject once the film was over”, said Aditya Patwardhan. Sriram Raja echoed Aditya’s thoughts by saying, “The Invisible Visible is a well-directed, well-documented film about an important issue. It is not the first film of its kind and doesn’t tell us something new that we don’t know already. But the way it is said, and the juxtapositions made it impactful. The characters featured in the film instill hope in bringing about change”. If Memory serves me Right, Rafeeq Ellias’s documentary on his dear friend Rasheed Irani touched so many hearts that it won the Audience Choice Award in the Documentary Category. “If Memory Serves Me Right is one of those films that will start off as another anecdotal journey that you might have heard many times before, but as the story progresses, you are deeply drawn into the perspective of its protagonist, surprised to realize at the end that it felt as if I had personally lived in the nostalgic era that he describes”, said Aditya Patwardhan.

In the Short Films category, the competition was intense, but Biju Das’s A Lost Tune of Life prevailed.  Prataya Saha’s Just Another Day won the Jury Award in the Women & Children Shorts category. “A Lost Tune of Life” an Assamese language-film is about how the loss of his trumpet affects Jiban but ends with a strong Indic message. “Just Another Day” is a 24-hour slice in the life of a 40-something, recently separated, as she navigates through her life in the busy city of Mumbai. “The short films screened this year were wonderful gems with surprising stories expressed as thoughtfully crafted cinematic pieces. The two winning films have storylines which carry deep wisdom, that is very much needed for our modern times, and the diligent camerawork will make you think long after watching the film, about the fragility of our values, not only just in India”, said Renata Keller. “Both films are well-made and grab your attention and have incorporated some brilliant shots that will make you wake up. While Just Another Day impressed with its poignancy, A Lost Tune of Life offers very original storytelling”, said Manouj Kadaamh. In addition, the Jury felt compelled to recognize Parijat, a Marathi-language Women and Children short film made by the duo Krushna Joshi and Diksha Vasudev about how a coming-of-age boy deals with the loss of his mother. “Charuch's struggle to rid himself of the pain and his journey to realize the mysterious secret of life forms the crux of the story. The film is very touching and provides a several pangs of true emotion”, said Manouj Kadaamh.  The Audience Choice Award in the Short Film category went to Himanshu Tomar’s Guru Dutt ki koi Film, a noir film that weaves the magic of yesteryears Indian cinema. Vrushab Maitri’s Maashi, a beautifully woven tale regarding how a little boy deals with the passing of his nanny won Audience Choice in the Women and Children Shorts category.

“Once again, we proved it that you can program a whole festival slate with films that carry a positive message. We have done it every single year. New Material, the South African film, ends with a message that adherence to our roots is what take care of our identity. Muthayya creates so much trouble for himself and his family, but in the end his passion is redeemed in ample measure. Geometry Box delves through so much pain and finds happy and real-world resolution at the end. Nauha, Tohfa, Tune of Life, Avaak, Radha, Ahilyabai Holkar, Munghyar, Bhangadwadi, Punorbason, Panisokori, AC 1995, and the rest – every single film is Indic-themed and comes with a positive message. We had several personalities that presented themselves through our films - Aurobindo, Subhash Chandra Bose, BB Lal, Aruna Vasudev, Rasheed Irani, Sarita Devi, Pabung Syam, Jogesh Dutta, Sajubai Gavit. Rajasaur, an ambitious children’s Dino film and Lahore Bhojanalay, a spy thriller based on real incidents were truly entertaining. We, at Indica Pictures, hope you enjoyed our festival. Exciting projects are on the anvil that will continue to drive out our efforts to revive Indic civilization values”, said Danji Thotapalli. A LIVE interaction with winning filmmakers is being planned in the coming days. 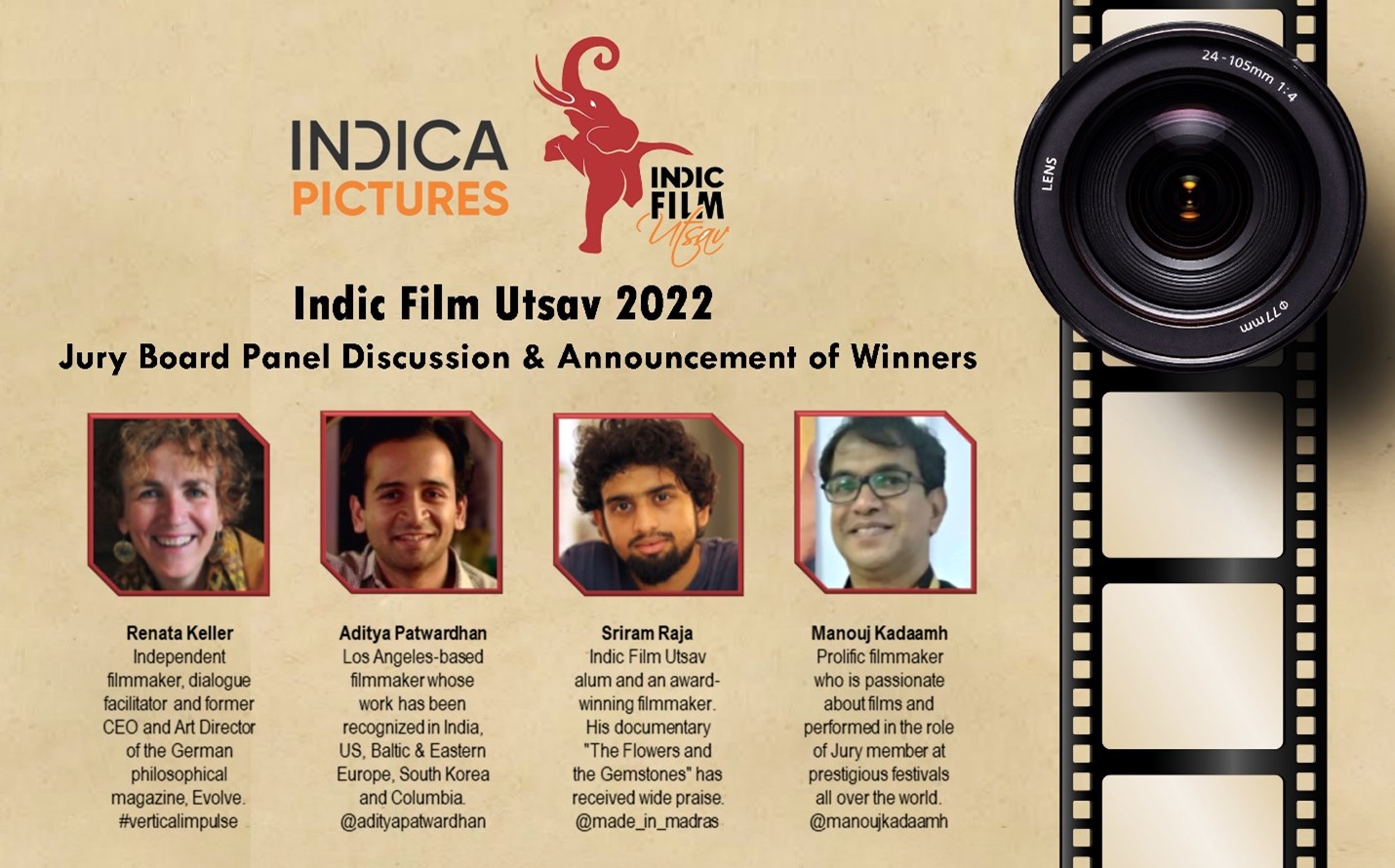