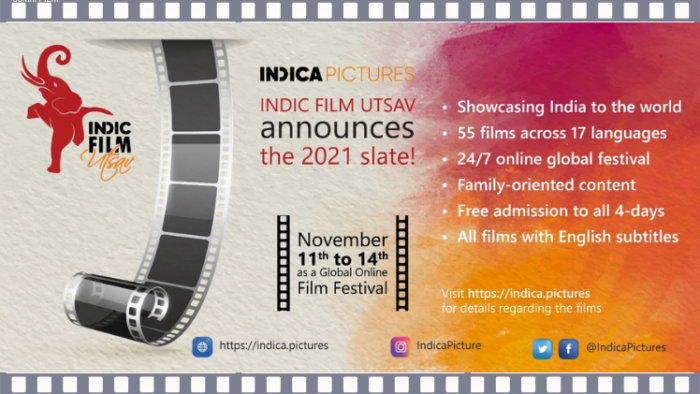 Indic Film Utsav 2021 proudly announces it’s slate of films that will be available for viewing across the globe 24/7 starting November 11th through to 14th. 55 films from 17 different languages have been lined-up for the viewing indulgence of global audiences. Indic Film Utsav 2021 will be hosted on Muvi.com, a highly-secure DRM-enabled OTT platform hosted on the cloud. There is no Admission Fees for the entire event. Visit IFU2021 to check out the entire line-up.

Hari Vadlamani, Founder, Indica - “The focus of Indic Film Utsav is Indic content and films that are for the entire family. Positivity is the basic tenet on which Indic Film Utsav has been built. I strongly suggest that you take time to go through the entire list of films and make a calendar of the ones you want to watch – you won’t be disappointed”.

Danji Thotapalli, Chief Curator, Indica Pictures & Festival Director, Indic Film Utsav - “Last year we received 13000 unique views over a 4-day period. That there is this hunger for films that end on a positive note and are not dark, was proven once again! We are proud of our Opening Film Punyakoti, which is a full-length animated feature in Sanskrit! Our Closing Film Sthalapuran, garnered many awards at various film festivals including the reputed Berlin Film Festival. Do not miss them since they are limited screenings! In the competitive category, each and every film has been handpicked for its ability to bring a smile onto your faces and fill your heart with positivity. I feel we consolidated on our successes from last year in a substantial way, especially in the face of the pandemic”.

Nikita Hattangady, Head of Programming, Indic Film Utsav - “Indic Film Utsav 2021 is a spectacular showcase of colorful films sharing glimpses of history, culture, language, art, music, and everything wonderful that is Indic.  Spend your time during Nov 11-14 experiencing the heritage of India from the comfort of your own home”.

Christian Frost, Head of Filmmaker Liaison, Indic Film Utsav – “I’m always inspired watching independent filmmakers who persist in creating deeply personal stories to tell. You need to use that passion to force these into existence. This year’s Indic Film Utsav showcases that grit and creativity with an amazing group of talented filmmakers whose individual voices can be seen, heard and felt. I invite everyone to experience this positive story telling opportunity and discover for yourself these visual voices of inspiration”.

Sumeet Borwankar, Head of Operations, Indic Film Utsav - “Second year, twice the fun! Indic Film Utsav continues to bring you only the best of indie films from India. I would say that the best way to watch these films is not to fast-forward them. Let them sink in and you will feel real emotions inside you! Every film has English sub-titles”.

Film Festivals are a great way for people to watch exceptional films that don’t find their way into the theaters or an OTT platform. These are gems that we have mined from hundreds of films! Thanks to technology, Indic Film Utsav has been able to break the barriers of physical distance. Built ground-up with an OTT DNA, you can watch the films at Indic Film Utsav from your couch anytime of the day, wherever you are located. Admission is FREE to the entire 4-day event scheduled for November 11th– 14th, 2021.