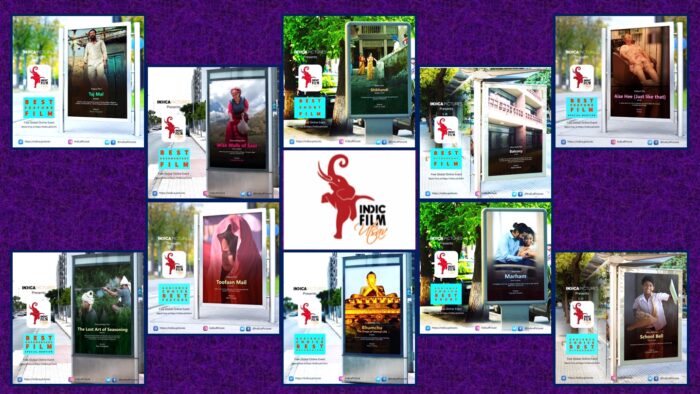 After a record-breaking opening day with Punyakoti – India’s first full-length animation film in Sanskrit, which saw over 10,000 hours of single day viewing time, Indic Film Utsav closed with Sthalapuran, a film about an 8-year old’s experience in a new place with torrential rain and a wild sea complicating the matter.

The 2021 Jury Board consisting of Ravi Gupta, Dean of Whistling Woods International, a leading film school in India, Renata Keller, Independent filmmaker, dialogue facilitator and former CEO and Art Director of German philosophical magazine Evolve, Kireet Khurana, well-known filmmaker, storyteller and Indic Film Utsav 2020 alumni and winner and Pradeep Paga - Prolific filmmaker who loves pushing the boundaries of filmmaking, convened on a Facebook LIVE event to share their thoughts on the films they viewed and evaluated under the competitive section of the festival, and declare the winners in each category.

Niyaz Mujawar’s TAJ MAL, a captivating film on the relationship of a boy with his goat won the JURY AWARD for BEST FEATURE FILM along with Rs 1,00,000. “Taj Mal stayed in my mind long after I completed watching the film. The dharmic message in what the butcher says is very important in today’s world”, said Renata Keller. Kislay’s debut feature, AISE HEE, a film about the social stigma and restrictions around widowhood won SPECIAL MENTION under this category with Rs 50,000. “A complex film done with a lot of care about how an old lady and a recent widow deals with her circumstances and comes out a winner. It is also a reflection of how Indian society is changing”, said Ravi Gupta. “Ethereal, Enigmatic, Intriguing, Beguiling” – were some words used to describe Akriti Singh’s debut film, TOOFAAN MAIL, which was the AUDIENCE CHOICE winner under Features category.

Under the documentaries category, the JURY AWARD with Rs 1,00,000 for BEST DOCUMENTARY FILM went to Deepak Ramola’s WISE WALLS OF SAUR which was about the despondent exodus out of villages in Uttarakhand. Pradeep Paga felt, “The narrative was top notch. Obviously, they wrote a tight script. The cause is very powerful and the project has a global appeal”. In this category too, the Jury felt compelled to announce a SPECIAL MENTION with Rs 50,000 to Abo Arangham’s THE LOST ART OF SEASONING, a rare Abatani language film regarding the dying art of salt making. “Brilliant cinematography, excellent story rhythm and flow and most importantly an anthropological subject that is attention grabbing – and we could not turn away from it”, said Kireet Khurana. Abanti Sinha’s BHUMCHU – THE DROPS OF ETERNAL LIFE won the AUDIENCE CHOICE. “Oh boy, a lot of interesting information in the movie”, said Pradeep Paga.

Under the fast-emerging ULTRASHORT FILMS category, Ashish Nehra’s THE BALCONY won the JURY AWARD and Rs 20,000 for BEST ULTRASHORT FILM. “A true pandemic film that maintained the 6 feet distance between characters”, said Pradeep Paga. THE SCHOOL BELL by B Suresh Kumar won the AUDIENCE CHOICE. “Many a time, it’s just that one thing that makes or breaks an ultrashort. In this case it was the child actor who was brilliant”, said Kireet Khurana.

Indic Film Utsav 2021 opened on November 11th 2021 as a 24/7 global online OTT event that saw a significant response from a demographic that was hungry for films that had positivity and were family-oriented. Besides the films mentioned above that won various awards, there were several significant films such as Gurvinder Singh’s KHANAUR, Mriganka Borah’s RIYAZ, Aakash Prabhakar’s FREDDIE’S PIANO, Madhulika Jalali’s GHAR KA PATA, Mandar Apte’s FROM INDIA WITH LOVE, and K R Subash’s KERALEEYA THALANGAL – that were brilliantly made and the difference between the winning films and the rest were just a couple of points!

“Once again, we did not back away due to the pandemic. We consolidated on our strengths and made key improvements. Our 24/7 online OTT model has stabilized further with smoother and bug-free experiences. We doubled down on our curating approach of programming only those films that provide a feeling that there is humanity still alive in the world, and it has paid off nicely. We have a multi-fold increase in viewership over last year. We will be sending out a survey to our filmmakers to secure their feedback to make further improvements and modifications as needed so that we can come back with a more powerful platform and offerings for Indic cinema," said Danji Thotapalli, Chief Curator and Festival Director of Indica Pictures.