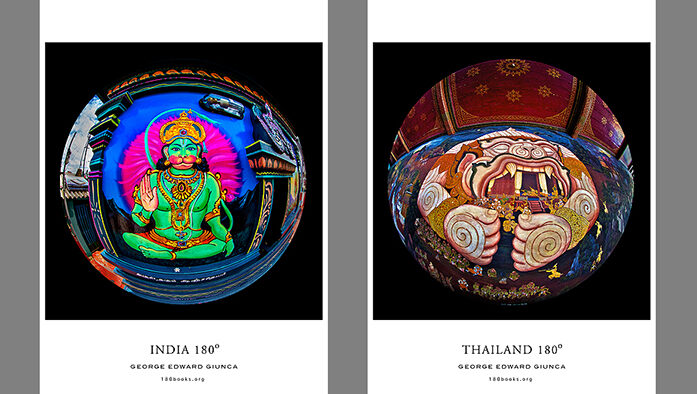 Photographer George Edward Giunca, and his Thai wife, Apisatha, have traveled around India capturing images through fish eye lenses. Their new forthcoming book India180° has images leaping out of these circles of time and space. Their pictures of Thailand and India placed side by side can tell a story of two beautiful cultures influencing each other. Read more:

The Asian landscape is very different from the West. You mention in your blog that you want to show people the true picture away from the prejudices and preconceptions people have. How does a non-Asian touch that core?

I knew that as a non-Asian, I would need some help to clarify any issues and preconceptions I had, and remember to keep an open mind. In my first project, our THAILAND 180º book, my Thai wife, Apisatha, and I started by making a list of what we thought was important about the country and what defined its various cultural aspects. We planned on showing the festivals, food, architecture, historic sites, and tourist attractions. Lots of effort and hours of research lead to an expanded list until we were satisfied.

Next, we traveled around the entire country, taking thousands of photos as we traveled. Finally, we arranged the images in a book, divided by regions in a photo essay format. We used only captions, no text to interrupt the flow between the viewer's eyes and mind. In this way, one can flip through our book's pages and form their own opinions and gather their own in-depth knowledge of the country. It's been hailed as a "visual encyclopedia" of the Kingdom.

We plan on doing the same kind of book for India. It took us 200 pages and 450+ images to make our THAILAND 180º book complete. Even knowing from the start that no book can fully describe a country, we know INDIA 180º will be huge. We dare to estimate that we are 60% done with the photography at this time. What are some of the differences between shooting in India and in Thailand?

From a photographer's point of view, the two countries have more in common than one might imagine. One difference was the spectacular architecture of the minority religious buildings in India. As a photographer, I had to capture them, which added a lot of depth to our visit. Conversing with people in mosques, cathedrals, synagogues, etc., helped us get a better feel for what common thread runs through all Indians and defines them as a whole, which was most rewarding.

Another difference is that while in Thailand, you can take photographs in almost every temple, we were strictly forbidden to take pictures in many of the beautiful temples in the south of India. This made our time there somewhat frustrating and unfulfilling. You interact with the subject before clicking. Do you find differences in how people live across India and between India and Thailand?

I have the feeling that Indian's are more enthusiastic about traveling around and sight-seeing within their country. Everywhere, daily life is centered around religion and calls for a colorful celebration. Apisatha pointed out that rural areas in India seem to have a more self-sufficient economy with less reliance on technology. The people seem more content with the resources on hand and don't require the latest fashions or gadgets for status. Almost everyone appeared to have a quiet dignity that was far from arrogant and quite refreshing. Temples and spirituality are a big draw in both countries. But the sculptures and architecture are in different styles. What appeals to you in both?

Obviously, most Indian temples are much older, and therefore it's hard to compare the architecture. I get excited just thinking about the first time I saw the Airavatesvara, Varadharaja Perumal, or Brihadeeswara temples. What can compare to the Ajanta and Ellora caves or the Khajuraho Group of Monuments?

Thailand does have some beautiful ancient kingdoms that are a must-see, especially Ayutthaya and Sukhothai. There are also magnificent Khmer temple ruins around Thailand, such as Prasat Hin Phanom Rung.

While most Thai temples were built in relatively modern times and can outwardly appear somewhat stylized and similar, each one has its own story to tell and knowledge and spiritual inspiration to reward the visitor. I recently observed Thai temples and city pillars with modern sculpture techniques and themes that have held me spellbound.

Of course, the true beauty of art is that it reaches viewers on a much deeper level and communicates things that words never could. Plus, each time it is viewed, it can instill different meanings and even trigger life-changing thoughts and revelations. How do you think Thailand has done better in highlighting its culture in a way that India can emulate?

Thailand has captured and branded their culture and distilled it into a unique quality they call "Thainess," which they have showcased worldwide in traveling roadshows, festivals, and press releases.

I'm sure India is doing some of the same things, but perhaps they need to do much more. I'm afraid that many otherwise well-meaning photojournalists and NGOs have accidentally done a great disservice to the tourism industry. While using powerful images for years upon years to raise money, they have perhaps filled people's minds with a distorted and outdated notion of India that it is filled with dust, poverty, and beggars. India has changed and is on the rise in every way. That story needs to be told, and we're here to help! What impact is created by going with black and white pictures in the Indian context?

Black and white photographs have the power to stop people's minds and allow them to see the world differently. Form, line, texture, and shape are more clearly revealed. That said, it seems a shame to do that with a culture as colorful and vibrant as India's! While I enjoyed the way some of my photos looked when I converted them to black and white, overall, the effect disappointed me. A case in point is a series of Indian portraits that we call "180º DREAMS of INDIA." In this series, I showed my subject in color, in the context of a black and white environment. Once again, words get in the way of art! Here are some examples of this effect. Boy at temple in Tamil Nadu How difficult is it to capture the cultural spirit as opposed to your earlier stint in the glamorous world of advertising. Can we 'brand' India in a way that can appeal to different sensibilities?

I often think that God gave me a boon whereby any subject that I point my camera towards gives me everything they have, letting their spirit shine through until I capture it. I'm forever grateful for this! Unless action is involved, most of my photos are done in two clicks! Look into the eyes of the people in the pictures above and see what I mean.

#IncredibleIndia is such an apt branding for the country. The cultural spirit of India comes across as so authentic, and it shines through in every experience a visitor encounters. Most travelers we talked to echoed our thoughts, "Why did I wait so long to visit India?!" People need to be educated, their thoughts updated, and reminded often of how much India has to offer. Once again, for me, the biggest draw to India is the authenticity of the experience.

If travelers are looking for gentrified cityscapes, the world's largest shopping malls, or desiring to take selfies in front of the tallest replica of the Eiffel Tower, India is Not for them! Please don't change.

Branding Extreme Luxury Travel at relatively reasonable prices also comes to mind, featuring the pairing of the wonderful Indian Luxury Trains with accommodation in the palaces that have been converted into luxury hotels. I can't help but think that my 180º photography would be a great fit for promoting this. Is traveling and living in India easy for non-Indians? Could you share few experiences?

Because most people speak and understand English, I was able to get answers to the millions of questions that I always have. Apisatha enjoyed being able to converse with the locals, which made her feel less homesick during our extended visits. She also mentioned that most people thought she was a native and occasionally talked to her in their local language.

Aside from easily resolving any problems that arose, the ability to communicate freely allowed me to appreciate the Indian sense of humor. It is so close to my own that I felt like a kindred spirit. That reminds me of a story.

After enjoying two days at the Golden Temple, I had asked our Sikh tour guide to show me how I'd look with a dastar. We were late to catch our train, and I ended up boarding it in Amritsar, still wearing it. I had completely forgotten about the dastar until the conductor gently told me that an American was supposed to be in my seat. Much laughter followed as I explained and showed my passport. George with a Dastar

Indians love Thai curry. What are your thoughts on the Indian thali?

I love the pairing of the Indian thali. The six different flavors of sweet, salty, bitter, sour, astringent, and spicy on one tray makes my mouth water to think of it! Whenever we explore a new region in India, we look forward to having a thali meal to sample the local specialties. Since traveling to India, we've been inspired to cook many Indian dishes at home and introduce them to our friends.

I want to thank everyone for reading this far and look forward to your comments. Although Apisatha and I have shared our opinions on the questions above. I now turn the keyboard over to her for these last two. Apisatha~

Thank You. Thai curry was adapted from Indian curry as food culture was expanded via the spice trade route, so I'm not surprised that Indians like it. I know from experience that Indians especially love Thai Green Curry. This curry is unique to Thailand as it is made with all fresh herbs and a generous amount of HOT green chilies. Thai Curry (above), Indian Thali (below)

What does your lovely wife like about India. Does she see a kindred civilization?

There are many parallels in Thai and Indian culture. In fact, We presented a photo exhibit on this very topic at the 2018 Thai /Indian Fun Fair in Bangkok, Thailand. As I pondered and researched, I found many similarities in Thai and Indian food, culture, arts, architecture, transportation, etc. Perhaps the photos show this better than words.

A kindred civilization is a great way to put it! I often wear Indian clothes and give them to friends as gifts. Since our languages are both based on Sanskrit, I sometimes catch myself humming and singing Hindu devotional songs. The new Mahabarata series that has been dubbed in Thai thrills me, and I can better explain parts of the older Sagar Krishna series to my husband in new ways.

I look forward to returning to India in the near future to finish our INDIA 180º book. If there's time, I just might give you a few tips on Thai cooking or reveal my Mom's secret Thai Green Curry recipe. Bye for now. Namaste! 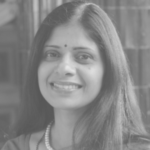 Aparna M Sridhar is a senior journalist, editor for Center for Soft Power (www.centerforsoftpower.org) and consulting editor for arts at IndicToday.