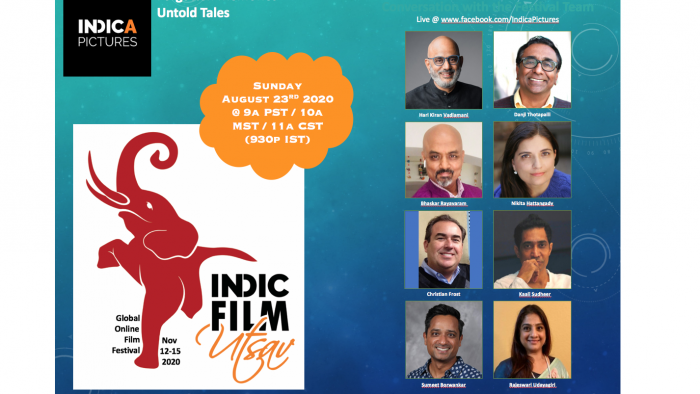 Harikiran Vadlamani who is the Founder of Indic Academy spoke and expressed his happiness at the progress that has been made. He talked about how important it is to create a support system and platform for filmmakers and audiences that celebrate Indic culture and civilizational thought.

Danji Thotapalli who is the Chief Curator of Indica Pictures spoke and said that the upcoming film festival is going to be a Global Online Film Festival which means all film screenings will be held online across multiple time zones. He said that the demographic for the Indic genre of films is quite spread out across the globe and that the online model was key to the strategy to reach as many people as possible.

Nikita Vyas Hattangady who heads programming spoke about the categories at the film festival. She said there will be five categories such as feature films, documentaries, short films, ultrashort films, and episodic pilots - each of which would have cash awards of up to one lakh Indian rupees besides recognition plaques.

Christian Frost who heads filmmaker liaison talked about how he was going to be playing the role of an advocate for the filmmakers and help them submit their films as well as participate in filmmaker panels.

Kaali Sudheer who heads Events and Production provided a view into how the opening night and closing night events would be held considering that we are in a pandemic situation.

Sumeet Borwankar who heads operations and project management talked about the “One Minute Promo Contest” that is ongoing right now and expressed happiness at the rate of response that has been received and that people from small towns were also responding to the contest enthusiastically.

The panel was a kick-off event for Indic Film Utsav and team members indicated there would be many more such events.