Carnatic Collective Showcases Carnatic Music in all its Intricate Glory 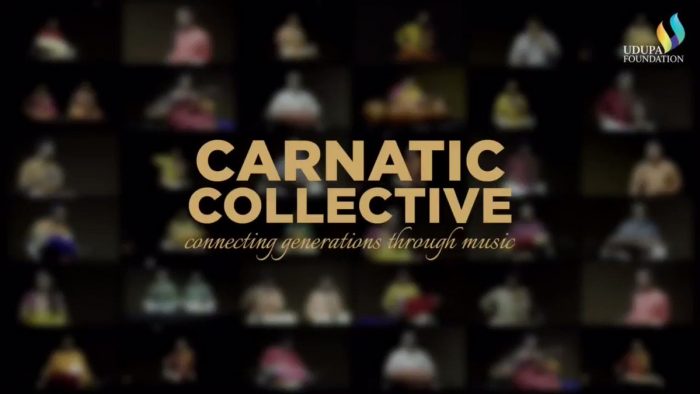 Carnatic music has always celebrated the contrast between experience and youth. Udupa Foundation brought together 15 clusters of accomplished musicians who explore different Carnatic concepts through the eyes of wisdom and enthusiasm. Much of the learning in Carnatic music happens on stage, sitting beside a revered icon. Over 15 sessions, Carnatic Collective became a musical laboratory of ideas as inspiration flowed back and forth.

The videos explore Carnatic concepts in a unique interaction with two generations of musicians. For instance, the krithi, one of the most popular forms of expression in Carnatic music is explored by Vainika Jayanthi Kumaresh and Akshay Anand.  The krithi has three sections called the Pallavi, Anupallavi and Charanam It gives scope to the composer to showcase the raga bhava and lyrical bhava adequately. Sri Thyagaraja has expounded the Kriti format to the fullest and has composed in several rare ragams also thereby giving those ragas a new lease of life.

Young Vaibhav Ramani plays Raghapravaham, the brainchild of renowned violinists Vidwan Ganesh and Vidwan Kumaresh, is a compositional form for instrumental music where the music is based on swaras only without any sahitya or lyrical content. A Ragapravaham composition has the ability to showcase the immense possibilities of an instrument. The Ragapravahams cover a wide range of speeds, techniques and octaves. To quote Sri Kumaresh, "The thought process behind Ragapravaham has come out of the traditional context of Carnatic music. It is thus music in its purest form, beyond the boundaries of lyrics. Raga, Tala and music are presented in its original form. Raga itself means colour, meaning the sound of raga gives the listener a Kaleidoscope of experiences. Ragapravahams are aimed at keeping Raga and music as just that."

For the first time, a video has come showcasing different parts of Carnatic music. Vidwan Ghatam Giridhar Udupa says the idea had two intentions – one to bring together youth and experience and second to showcase Carnatic music to even those who don’t follow it regularly.

The project also showcases different music instruments. Carnatic Music is an ocean of knowledge filled with rich concepts of melody and rhythm. Especially in rhythm, there are many unique concepts which are not found in any other art forms of the world. The possibilities of mathematical patterns and symmetries are innumerable with a vast variety of Talas involving different numbers.

Ghatam Giridhar Udupa says the videos shot at Shaale were very different from a concert scenario where the entire session is tuned to the audience’s pleasure. Here the musicians are clearly in a world of their own.

Indica Pictures was a sponsor for the project.